On Sunday March 29, 2015 beginning at 4:00 in the afternoon and lasting until 6:00 in the evening, at the Museum of the White Mountains in Plymouth, NH there was an exhibition preview to the new exhibit titled “Trail Clubs of the White Mountains.” Representing The Cohos Trail Association for this preview was TCTA’s President Chad Pepau, of Somersworth, NH. While the preview was by invitation only, this new exhibit officially opens to the public tomorrow, March 31 and will be on display through March 6, 2016.

During the preview, invitees had a chance to meet and greet with members of the many trail clubs in the White Mountains including the Randolph Mountain Club, Appalachian Mountain Club, White Mountain National Forest personnel, Trailwrights, Squam Lakes Association, Shelburne Trails Club, Chocorua Mountain Club, among others.  Also present were the lean-to builders, John and Caroline Nininger, owners of The Wooden House Company, Ltd. of Newbury, Vermont.

Director of the Museum of the White Mountains, Catherine Amidon introduced the curators responsible for putting this exhibit together. They included Steve Smith, Mike Dickerman, and Ben Amsden. Mike spoke stating that it was fun for the team to dive into the history of the White Mountains, especially when it pertained to Trail Clubs, past and present. He also said that it took two years for all of this to come together.

Steve Barba, former General Manager of the Balsams Resort in Dixville Notch and currently serving as Executive Director of University Relations at Plymouth State University, was also present and discussed a bit of history about the Balsams and the relationship that was built between the Tillotsons, the Balsams, himself, and The Cohos Trail Association. Steve stated that Mr. Neil Tillotson was quite pleased when the Cohos Trail’s founder, Kim R. Nilsen contacted him asking permission to place a new foot trail over Dixville Peak. The relationship Kim Nilsen created then continues to thrive today.

The preview was well attended and everyone had a great time. It brought great pleasure to Chad to be able to meet different folks and share many of the exciting things The Cohos Trail Association is currently involved with, along with plans for this summer, and of course, in 2016 when the log lean-to on display in this exhibit is actually moved north and placed along the mighty Cohos Trail in the Pittsburg region.

For your enjoyment, be sure to check out the video related to putting the lean-to together on March 12, inside the Museum of the White Mountains, as well as another video narrated by John Nininger, the builder of this magnificent lean-to. 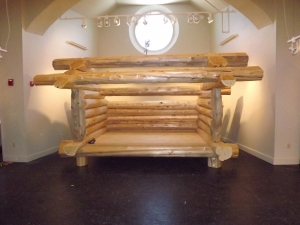