How Do We Build a Hiker Hostel, Eh?

Home/News/How Do We Build a Hiker Hostel, Eh?
Previous Next

How Do We Build a Hiker Hostel, Eh?

Everyone is familiar with the AMC’s high huts in the White Mountains and many have dropped in on the Randolph Mountain Club’s huts 3,000-plus vertical feet above Route 2 in the northern Presis. In Colorado, the 10th Mountain Division hut system stretches across the state. In Europe, of course, high mountain huts and hostels are a continental treasure.

And the Cohos Trail? Could there be a hiker hut in the mighty CT’s future? If so, what stones would we have to look under to raise the dollars, formalize a plan, galvanize volunteers, and tell the world?

Let’s drop back 25 years, when the concept of the Cohos Trail was little more than a few maps on a floor and pipe dream smoke… 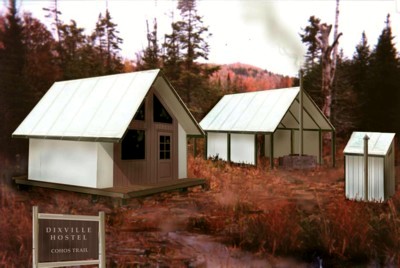 Even then the idea of creating a long-distance trail in Coos County was sprinkled with hiker hut concepts, from permanent solid wall tents,, to yurts, to log cabins, to Adirondack-classic-style mountain architecture. In the 20 years of the trail’s existence, all efforts were channeled into getting the pathway on the ground and motivating people to come out and hike on the fir-clad back of this new animal, not working up a hut from scratch.

Truth be known, though, early on we did come within $3,001 of acquiring a tax-lien property on the South Pond Road in Stark to underpin a future hostel. We bid $3,000, thanks to a plethora of small gifts from scores of folks. But the property lien sold for $6,000. Had we bid $6,001, the Cohos Trail Association would presently own an acre of land within a two-minute woods walk of the actual CT route. It was not to be. Such is life!

A little while later, a character who owned a mobile home right on the banks of the Upper Ammonoosuc River called to say he would like to offer his trailer and the little plot of land there to the association, scott free. Just take over the assets. He’d walk away from the place. We took a look at the property. It was dead inside the floodplain, right on the river alright. If any habitation along the entire length of the Upper Ammo was going to be lost to heavy floodwaters, this was it. Thank you for the offer, but we had to turn it down or drown.

Now, the Cohos Trail is complete end to end, although we will be tweaking it over the next few years to hopefully make route improvements just south of Dixville Peak, a bit north of Coleman State Park and on Deer Mountain. We have shelters and composting privies in place. But we don’t have the one thing that was also figured into the original plan: a hostel/headquarters facility smack on the Cohos Trail.

Backtracking again, there were some high-pie-in-the-sky concepts scratched out years ago, including creating not one but four smallish huts stretched out along the proposed CT route. One idea called for a bunkhouse-like cabin in Jefferson near Pondicherry Wildlife Refuge. The biggest and brightest hovel was to be in Stark close to the Bell Hill bridge. There was a rustic logging camp-like creation envisioned deep down on the east side of Dixville Notch. And, finally, a low-slung hand-hewn log cabin was proposed for northern Pittsburg about a half mile from where our Tillotson lean-to shelter now sits.

Four huts would be nice in a billionaire’s dream, but one would be, well, more realistic, most would agree.

But how would building just one get accomplished? Lots of people have expressed interest in lending a volunteer’s hand building the beast, but where does the one most critical resource needed come from, that wee little thing called money. You know, legal tender, cabbage, greenbacks, bucks, denaro, dough, loot, coin, honk, scratch, clams, shillings, paper, moolah, filthy lucre.

How do we build a war chest of $200,000, $300,000, even half a million? What gumbo mix of donors large and small, grants, bequests, sponsors, manna from heaven, and bank heists would combine to get the Cohos Trail to the hiker-hostel finish line? 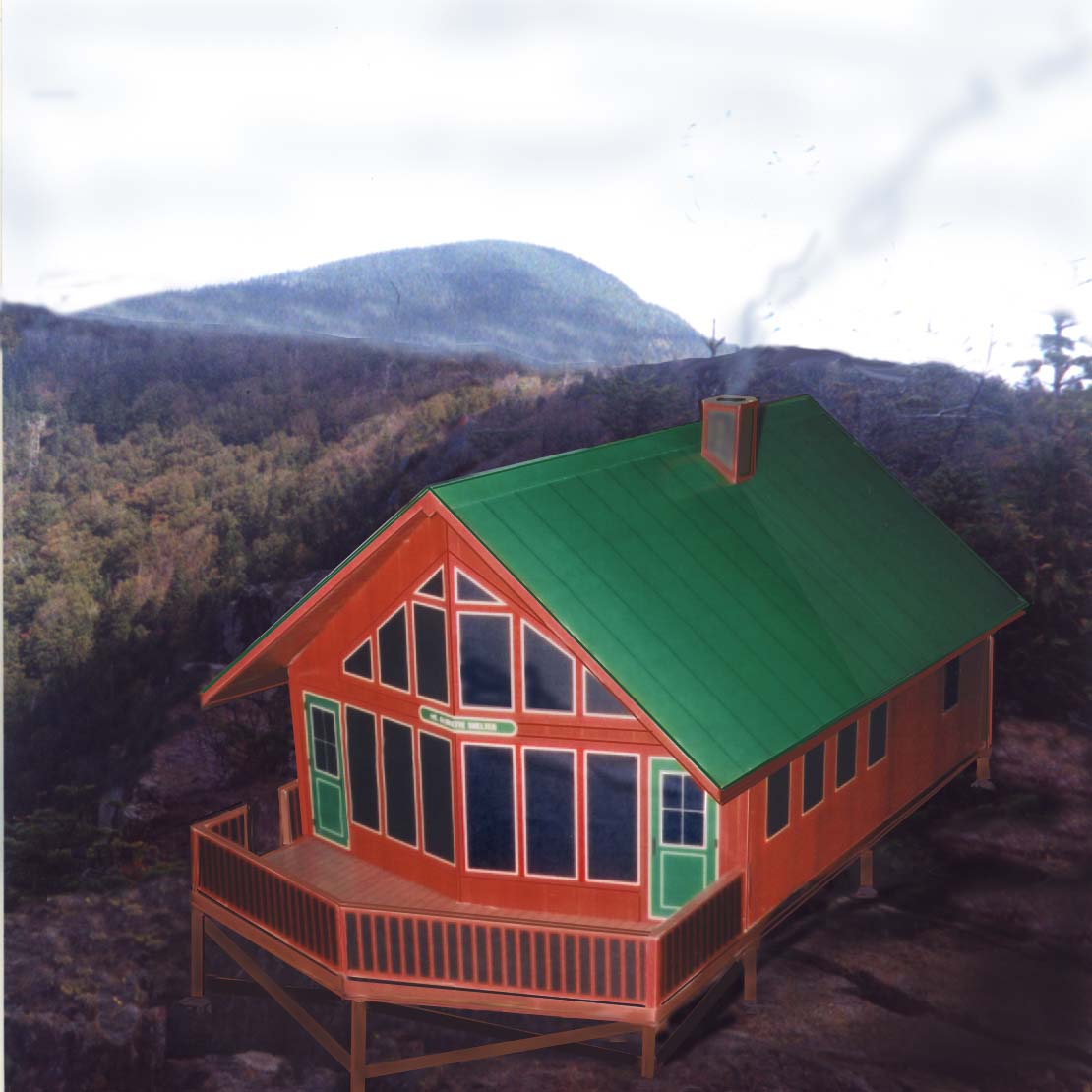 Another early concept, by Kim Nilsen

Would the facility be more apt to be viable if it could double as a small educational and entertainment venue, where there could be lectures held, seminars, intimate music performances, hands-on how-to sessions, certification classes, and so on?

Once people showed up at the door for an overnight stay, what would we charge them so we could keep the doors open? $20 a night for a bunk to lay the sleeping bag down on? $25, $35, $50…what? Would we feed people like the AMC does, or provide a space to cook your own meal like the RMC does? Would we provide cooking facilities inside or outside under a pavilion roof? Do we contract out to a local citizen or business to provide pre-ordered brought-in evening meals?

So many questions; so many to answer. But the reason for this bit of written English is to nudge we humans into thinking about the potential of creating a hiker hostel/headquarters for the Cohos Trail in the future. Who would have a real interest in this? Who would support this with a dollar or a cool half-million, with a hammer in hand, with a spreadsheet entry or two, with a materials donation, with a big story to big media (news and social) to get the word out?

Remarkably, we already do have one talented mountaineer/seasoned trail maintainer/intel guru who has already expressed a hard and fast interest in being the caretaker/manager of whatever it is we might actually create. And we already know that there are only two truly feasible spots to locate a facility, one being at Stark and the other in Dixville.

If you are jazzed by the concept of a facility for nonmotorized recreators of all stripes on the Cohos Trail, either drop a line at [email protected] or go to Friends of the Cohos Trail on Facebook and join (if you haven’t already). Post that you are absolutely wild and crazy about this idea and would like to help sometime in the months and years ahead in whatever manner appeals to you.

Don’t be shy. We’ll leave the light on for you, if and when you’d like to tiptoe in under the cover of nightfall and leave your thoughts on the porch.