Home/News/Replacing Puncheons by the Score
Previous Next

Every trail system in terrain that receives 30 inches or more of rain a year has as similar, persistent problem. Trails over wet ground require bog bridges (puncheon spans) that keep hikers off moist soils. No puncheons and the path soon becomes a waterlogged trench. Such structures are simple enough, but they take some real work to put in place, only to have them deteriorate rapidly in little more than a decade.

The Cohos Trail has a substantial share of bog bridges along its route, and after 20 years of existence the path is always in need of refurbishing the wooden spans. Year 2019 was no exception, and 2020 will be no exception either.

In 2019, volunteers replaced two separate sets of puncheon spans on the Falls in the River Trail, installing pressure-treated units with nonskid chicken-wire coverings. At least a dozen souls showed for that work day in northern Pittsburg, and the crew made fairly quick work of hand hauling the timbers, pulling up the old spans, and installing a new ones. Most bog bridge work that the association does now features pressure-treated timber so we may double and even triple the lifespan of the units. 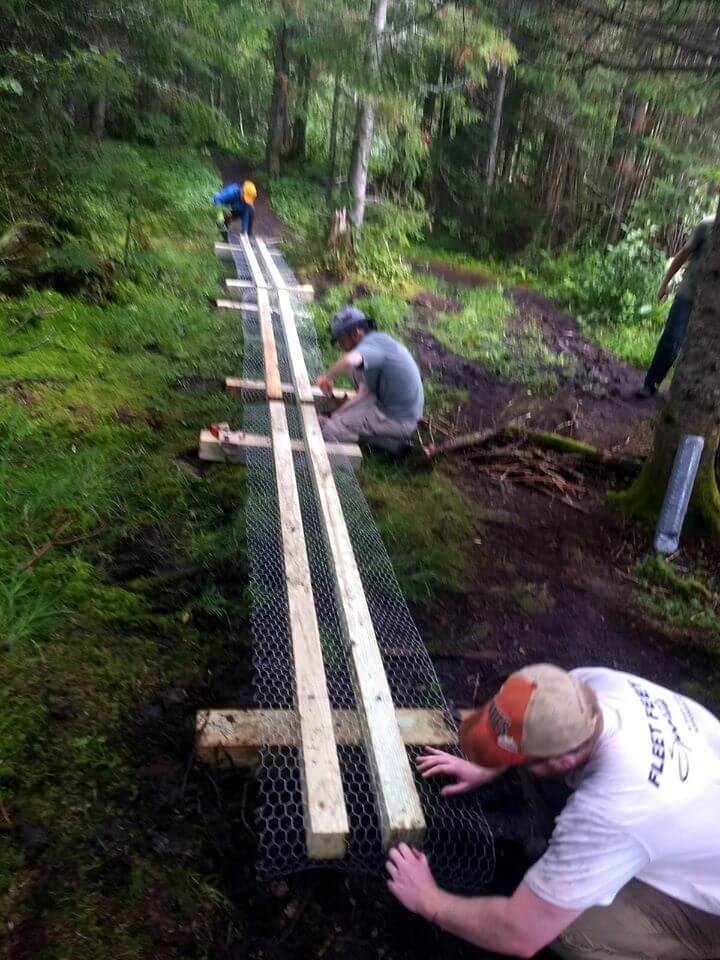 But there are locations where pressure-treated material is not permissible, such as in wilderness-designated areas and in the Pondicherry Wildlife Refuge in Jefferson township. This fall, we helped Pondicherry manager David Govatski haul and install heavy rough-sawn hemlock planks and mud sills down the Slide Brook Trail to the vicinity of the beaver bog halfway along the trail. Again, there was a considerable turnout and the crew made short work of the project and even firmed up some pathway on the old beaver dam nestled far beneath the pyramid profile of Owls Head peak looming to the south.

In 2020, the puncheon span work will likely get a bit more demanding. Fourth Connecticut Lake Trail on Nature Conservancy property smack on the Canadian border needs a great number of bog bridges replaced up to and all the way around the two-acre shallow fen (pond) that is the headwaters of the Connecticut River. So many spans are required and so much heavy material needs to be ferried up steep terrain that the Nature Conservancy has been talking with the National Guard to see if a helicopter training operation might be staged in northern Pittsburg so that the materials may be airlifted by chopper from the Hicks Hardware yard at Happy Corner hamlet and flown to the 40-foot wide, endless boundary clearing swath directly on the international boundary.

If the timber can be dropped on the border, it would still require a good-size crew and probably a long weekend to pull up the old spans and replace them with the new ones. It is no small project, but a critical one. Keeping hikers from degrading the fragile environment at the headwaters pond is most certainly a high priority for us and the Nature Conservancy.

And it does not get any easier from there. Gadwah Notch is a much loved and rather mysterious environment on the west shoulder of Mt. Muise. There have been bog bridge spans in there since day one, and for good reason. The area drains water very poorly and it did not take long before the Cohos Trail was sopping wet in there soon after the trail was punched through. Puncheon timbers have been cut, top-squared, and spiked into place in Gadwah several times over the years, but now a fair majority really do have to be replaced.

Well fine, but Gadwah Notch is one of the more remote areas on the Cohos Trail. Materials can only be ferried to within about a mile of the location they are needed. That means lots of pressure-treated material will have to be hand-hauled a good distance to make the project feasible. We would like to stay away from felling spruce trees for puncheons for a number or reasons, foremost being that spruce bog bridges in that high and notoriously wet and foggy environment do not last terribly long.

In the past, NorthWoods Stewardship crews have worked in the notch, setting up spike camps each time and staying in that country for days on end. Unless we are able to attract a very large group of volunteers to help in Gadwah, a spike camp may be necessary, too. It’s either that or we wait a year, try to obtain a grant or a monetary gift, and see if we can contract the work to a pro crew.

Back in northern Pittsburg, we have hundreds and hundreds of feet of rough-sawn hemlock ingle-width boards spiked down onto softwood log sills on the Bog Bridge Trail. They have been quite serviceable for nearly ten years now, but some of them are beginning to fail. To tackle them, it would probably be wise to refurbish individual spans in the long chain of puncheons a little at a time over perhaps four or five years until the whole snaking structure in very moist spruce barren is replaced with pressure-treated material.

Of course, there are still other units that need a going over, particularly one chain in the Sims Stream Valley area at the lowest point between Gadwah Notch and Baldhead Shelter. So there will be no shortage of work in the months and years ahead.